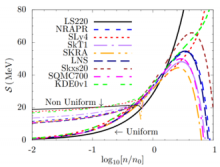 The equation of state (EOS) of dense matter is an essential ingredient for numerical simulations of core-collapse supernovae and neutron star mergers. The properties of matter near and above nuclear saturation density are uncertain, which translates into uncertainties in astrophysical simulations and their multi-messenger signatures. Therefore, a wide range of EOSs spanning the allowed range of nuclear interactions are necessary for determining the sensitivity of these astrophysical phenomena and their signatures to variations in input microphysics. We present a new set of finite temperature EOSs based on experimentally allowed Skyrme forces. We employ a liquid drop model of nuclei to capture the non-uniform phase of nuclear matter at sub-saturation density, which is blended into a nuclear statistical equilibrium EOS at lower densities. We also provide a new, open-source code for calculating EOSs for arbitrary Skyrme parametrizations. We then study the effects of different Skyrme parametrizations on thermodynamical properties of dense astrophysical matter, the neutron star mass-radius relationship, and the core collapse of 15 and 40 solar mass stars.