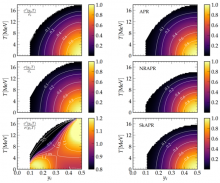 Differences in the equation of state (EOS) of dense matter translate into differences in astrophysical simulations and their multi-messenger signatures. Thus, extending the number of EOSs for astrophysical simulations allows us to probe the effect of different aspects of the EOS in astrophysical phenomena. In this work, we construct the EOS of hot and dense matter based on the Akmal, Pandharipande, and Ravenhall (APR) model and thereby extend the open-source SROEOS code which computes EOSs of hot dense matter for Skyrme-type parametrizations of the nuclear forces. Unlike Skrme-type models, in which parameters of the interaction are fit to reproduce the energy density of nuclear matter and/or properties of heavy nuclei, the EOS of APR is obtained from potentials resulting from fits to nucleon-nucleon scattering and properties of light nuclei. In addition, this EOS features a phase transition to a neutral pion condensate at supra-nuclear densities. We show that differences in the effective masses between EOSs have consequences for the properties of nuclei in the sub-nuclear inhomogeneous phase of matter. We also test the new EOS of APR in spherically symmetric core-collapse of massive stars with 15 and 40 solar mass stars, respectively. We find that the phase transition in the EOS of APR speeds up the collapse of the star. However, this phase transition does not generate a second shock wave or another neutrino burst as reported for the hadron-to-quark phase transition. The reason for this difference is that the onset of the phase transition in the EOS of APR occurs at larger densities than for the quark-to-hadron transition employed earlier which results in a significantly smaller softening of the high density EOS.