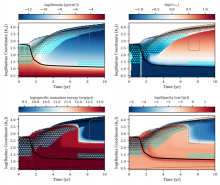 Over 40 years of research suggests that the common envelope phase, in which an evolved star engulfs its companion upon expansion, is the critical evolutionary stage forming short-period, compact-object binary systems, such as coalescing double compact objects, X-ray binaries, and cataclysmic variables. In this work, we adapt the one-dimensional hydrodynamic stellar evolution code, MESA, to model the inspiral of a 1.4 M ⊙ neutron star (NS) inside the envelope of a 12 M ⊙ red supergiant star. We self-consistently calculate the drag force experienced by the NS and the back-reaction onto the expanding envelope as the NS spirals in. Nearly all of the hydrogen envelope escapes, expanding to large radii (~102 au) where it forms an optically thick envelope with temperatures low enough that dust formation occurs. We simulate the NS orbit until only 0.8 M ⊙ of the hydrogen envelope remains around the giant star's core. Our results suggest that the inspiral will continue until another ≈0.3 M ⊙ are removed, at which point the remaining envelope will retract. Upon separation, a phase of dynamically stable mass transfer onto the NS accretor is likely to ensue, which may be observable as an ultraluminous X-ray source. The resulting binary, comprised of a detached 2.6 M ⊙ helium star and an NS with a separation of 3.3–5.7 R ⊙, is expected to evolve into a merging double neutron-star, analogous to those recently detected by LIGO/Virgo. For our chosen combination of binary parameters, our estimated final separation (including the phase of stable mass transfer) suggests a very high α CE-equivalent efficiency of ≈5.