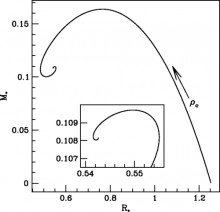 We study the general relativistic collapse of neutron star (NS) models in spherical symmetry. Our initially stable models are driven to collapse by the addition of one of two things: an initially ingoing velocity profile, or a shell of minimally coupled, massless scalar field that falls onto the star. Tolman-Oppenheimer-Volkoff (TOV) solutions with an initially isentropic, gamma-law equation of state serve as our NS models. The initial values of the velocity profile’s amplitude and the star’s central density span a parameter space which we have surveyed extensively and which we find provides a rich picture of the possible end states of NS collapse. This parameter space survey elucidates the boundary between Type I and Type II critical behavior in perfect fluids which coincides, on the subcritical side, with the boundary between dispersed and bound end states. For our particular model, initial velocity amplitudes greater than 0.3c are needed to probe the regime where arbitrarily small black holes can form. In addition, we investigate Type I behavior in our system by varying the initial amplitude of the initially imploding scalar field. In this case we find that the Type I critical solutions resemble TOV solutions on the 1-mode unstable branch of equilibrium solutions, and that the critical solutions’ frequencies agree well with the fundamental mode frequencies of the unstable equilibria. Additionally, the critical solution’s scaling exponent is shown to be well approximated by a linear function of the initial star’s central density.