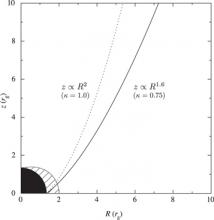 The M87 jet is extensively examined by utilizing general relativistic magnetohydrodynamic (GRMHD) simulations, as well as the steady axisymmetric force-free electrodynamic (FFE) solution. Quasi-steady funnel jets are obtained in GRMHD simulations up to the scale of ~100 gravitational radii (r g) for various black hole (BH) spins. As is known, the funnel edge is approximately determined by the following equipartitions: (i) the magnetic and rest-mass energy densities and (ii) the gas and magnetic pressures. Our numerical results give an additional factor that they follow the outermost parabolic streamline of the FFE solution, which is anchored to the event horizon on the equatorial plane. We also show that the matter-dominated, nonrelativistic corona/wind plays a dynamical role in shaping the funnel jet into the parabolic geometry. We confirm a quantitative overlap between the outermost parabolic streamline of the FFE jet and the edge of the jet sheath in very long baseline interferometry (VLBI) observations at ~(101–105)r g, suggesting that the M87 jet is likely powered by the spinning BH. Our GRMHD simulations also indicate a lateral stratification of the bulk acceleration (i.e., the spine-sheath structure), as well as an emergence of knotty superluminal features. The spin characterizes the location of the jet stagnation surface inside the funnel. We suggest that the limb-brightened feature could be associated with the nature of the BH-driven jet, if the Doppler beaming is a dominant factor. Our findings can be examined with (sub)millimeter VLBI observations, giving a clue for the origin of the M87 jet.