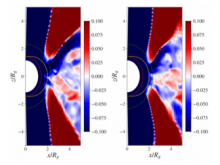 We perform GR-MHD simulations of outflow launching from thin accretion disks. As in the nonrelativistic case, resistivity is essential for the mass loading of the disk wind. We implemented resistivity in the ideal GR-MHD code HARM3D, extending previous works for larger physical grids, higher spatial resolution, and longer simulation time. We consider an initially thin, resistive disk orbiting the black hole, threaded by a large-scale magnetic flux. As the system evolves, outflows are launched from the black hole magnetosphere and the disk surface. We mainly focus on disk outflows, investigating their MHD structure and energy output in comparison with the Poynting-dominated black hole jet. The disk wind encloses two components—a fast component dominated by the toroidal magnetic field and a slower component dominated by the poloidal field. The disk wind transitions from sub- to super-Alfvénic speed, reaching velocities

0.1c. We provide parameter studies varying spin parameter and resistivity level and measure the respective mass and energy fluxes. A higher spin strengthens the B

-dominated disk wind along the inner jet. We disentangle a critical resistivity level that leads to a maximum matter and energy output for both, resulting from the interplay between reconnection and diffusion, which in combination govern the magnetic flux and the mass loading. For counterrotating black holes the outflow structure shows a magnetic field reversal. We estimate the opacity of the innermost accretion stream and the outflow structure around it. This stream may be critically opaque for a lensed signal, while the axial jet funnel remains optically thin.