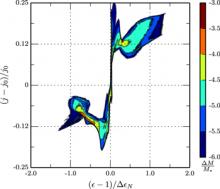 of the stellar mass bound to the black hole has settled into an accretion flow. Shocks near the stellar pericenter and also near the apocenter of the most tightly bound debris dissipate orbital energy, but only enough to make its characteristic radius comparable to the semimajor axis of the most bound material, not the tidal radius as previously envisioned. The outer shocks are caused by post-Newtonian relativistic effects, both on the stellar orbit during its disruption and on the tidal forces. Accumulation of mass into the accretion flow is both non-monotonic and slow, requiring several to 10 times the orbital period of the most tightly bound tidal streams, while the inflow time for most of the mass may be comparable to or longer than the mass accumulation time. Deflection by shocks does, however, cause some mass to lose both angular momentum and energy, permitting it to move inward even before most of the mass is accumulated into the accretion flow. Although the accretion rate still rises sharply and then decays roughly as a power law, its maximum is

the previous expectation, and the timescale of the peak is

longer than previously predicted. The geometric mean of the black hole mass and stellar mass inferred from a measured event timescale is therefore

the value given by classical theory.