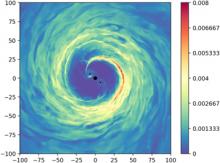 In this paper we continue the first ever study of magnetized mini-disks coupled to circumbinary accretion in a supermassive binary black hole (SMBBH) approaching merger reported in Bowen et al. We extend this simulation from 3 to 12 binary orbital periods. We find that relativistic SMBBH accretion acts as a resonant cavity, where quasi-periodic oscillations tied to the frequency at which the black hole's (BH's) orbital phase matches a nonlinear m = 1 density feature, or "lump," in the circumbinary accretion disk permeate the system. The rate of mass accretion onto each of the mini-disks around the BHs is modulated at the beat frequency between the binary frequency and the lump's mean orbital frequency, i.e.,

, while the total mass accretion rate of this equal-mass binary is modulated at two different frequencies,

. The instantaneous rotation rate of the lump itself is also modulated at two frequencies close to the modulation frequencies of the total accretion rate,

. Because of the compact nature of the mini-disks in SMBBHs approaching merger, the inflow times within the mini-disks are comparable to the period on which their mass supply varies, so that their masses—and the accretion rates they supply to their BHs—are strongly modulated at the same frequency. In essence, the azimuthal symmetry of the circumbinary disk is broken by the dynamics of orbits near a binary, and this m = 1 asymmetry then drives quasi-periodic variation throughout the system, including both accretion and disk-feeding. In SMBBHs approaching merger, such time variability could introduce distinctive, increasingly rapid, fluctuations in their electromagnetic emission.