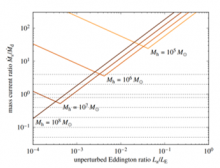 A fraction of tidal disruption events (TDEs) occur in active galactic nuclei (AGNs) whose black holes possess accretion disks; these TDEs can be confused with common AGN flares. The disruption itself is unaffected by the disk, but the evolution of the bound debris stream is modified by its collision with the disk when it returns to pericenter. The outcome of the collision is largely determined by the ratio of the stream mass current to the azimuthal mass current of the disk rotating underneath the stream footprint, which in turns depends on the mass and luminosity of the AGN. To characterize TDEs in AGNs, we simulated a suite of stream–disk collisions with various mass current ratios. The collision excites shocks in the disk, leading to inflow and energy dissipation orders of magnitude above Eddington; however, much of the radiation is trapped in the inflow and advected into the black hole, so the actual bolometric luminosity may be closer to Eddington. The emergent spectrum may not be thermal, TDE-like, or AGN-like. The rapid inflow causes the disk interior to the impact point to be depleted within a fraction of the mass return time. If the stream is heavy enough to penetrate the disk, part of the outgoing material eventually hits the disk again, dissipating its kinetic energy in the second collision; another part becomes unbound, emitting synchrotron radiation as it shocks with surrounding gas.