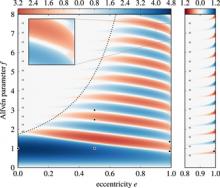 Eccentric disks arise in such astrophysical contexts as tidal disruption events, but it is unknown whether the magnetorotational instability (MRI), which powers accretion in circular disks, operates in eccentric disks as well. We examine the linear evolution of unstratified, incompressible MRI in an eccentric disk orbiting a point mass. We consider vertical modes of wavenumber k on a background flow with uniform eccentricity e and vertical Alfvén speed

along an orbit with mean motion n. We find two mode families, one with dominant magnetic components, the other with dominant velocity components. The former is unstable at

, and the latter at e

3, MRI behaves much like in circular disks, but the growth per orbit declines slowly with increasing e; for f 2

3, modes grow by parametric amplification, which is resonant for 0 < e