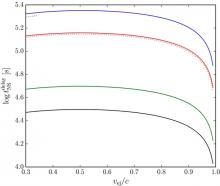 Short gamma-ray bursts (SGRBs) are among the most luminous explosions in the universe and their origin still remains uncertain. Observational evidence favors the association with binary neutron star or neutron star-black hole (NS-BH) binary mergers. Leading models relate SGRBs to a relativistic jet launched by the BH-torus system resulting from the merger. However, recent observations have revealed a large fraction of SGRB events accompanied by X-ray afterglows with durations ~102-105 s, suggesting continuous energy injection from a long-lived central engine, which is incompatible with the short (

1 s) accretion timescale of a BH-torus system. The formation of a supramassive NS, resisting the collapse on much longer spin-down timescales, can explain these afterglow durations, but leaves serious doubts on whether a relativistic jet can be launched at the merger. Here we present a novel scenario accommodating both aspects, where the SGRB is produced after the collapse of a supramassive NS. Early differential rotation and subsequent spin-down emission generate an optically thick environment around the NS consisting of a photon-pair nebula and an outer shell of baryon-loaded ejecta. While the jet easily drills through this environment, spin-down radiation diffuses outward on much longer timescales and accumulates a delay that allows the SGRB to be observed before (part of) the long-lasting X-ray signal. By analyzing diffusion timescales for a wide range of physical parameters, we find delays that can generally reach ~105 s, compatible with observations. The success of this fundamental test makes this "time-reversal" scenario an attractive alternative to current SGRB models.