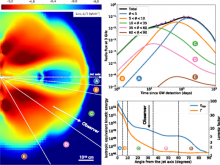 The binary neutron star (BNS) merger GW170817 was the first astrophysical source detected in gravitational waves and multiwavelength electromagnetic radiation. The almost simultaneous observation of a pulse of gamma rays proved that BNS mergers are associated with at least some short gamma-ray bursts (GRBs). However, the gamma-ray pulse was faint, casting doubt on the association of BNS mergers with the luminous, highly relativistic outflows of canonical short GRBs. Here we show that structured jets with a relativistic, energetic core surrounded by slower and less energetic wings produce afterglow emission that brightens characteristically with time, as recently seen in the afterglow of GW170817. Initially, we only see the relatively slow material moving towards us. As time passes, larger and larger sections of the outflow become visible, increasing the luminosity of the afterglow. The late appearance and increasing brightness of the multiwavelength afterglow of GW170817 allow us to constrain the geometry of its ejecta and thus reveal the presence of an off-axis jet pointing about 30° away from Earth. Our results confirm a single origin for BNS mergers and short GRBs: GW170817 produced a structured outflow with a highly relativistic core and a canonical short GRB. We did not see the bright burst because it was beamed away from Earth. However, approximately one in 20 mergers detected in gravitational waves will be accompanied by a bright, canonical short GRB.