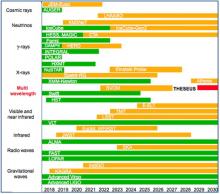 The recent discovery of the electromagnetic counterpart of the gravitational wave source GW170817, has demonstrated the huge informative power of multi-messenger observations. During the next decade the nascent field of multi-messenger astronomy will mature significantly. Around 2030 and beyond, third generation ground-based gravitational wave detectors will be roughly ten times more sensitive than the current ones. At the same time, neutrino detectors currently upgrading to multi km3 telescopes, will include a 10 km3 facility in the Southern hemisphere. In this review, we describe the most promising sources of high frequency gravitational waves and neutrinos that will be detected in the next two decades. In this context, we show the important role of the Transient High Energy Sky and Early Universe Surveyor (THESEUS), a mission concept accepted by ESA for phase A study and proposed by a large international collaboration in response to the call for the Cosmic Vision Programme M5 missions. THESEUS aims at providing a substantial advancement in early Universe science as well as in multi–messenger and time–domain astrophysics, operating in strong synergy with future gravitational wave and neutrino detectors as well as major ground- and space-based telescopes. This review is an extension of the THESEUS white paper (Amati et al., 2017), also in light of the discovery of GW170817/GRB170817A that was announced on October 16th, 2017.