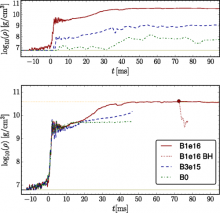 The recent multimessenger observation of the short gamma-ray burst (SGRB) GRB 170817A together with the gravitational wave (GW) event GW170817 provides evidence for the long-standing hypothesis associating SGRBs with binary neutron star (BNS) mergers. The nature of the remnant object powering the SGRB, which could have been either an accreting black hole (BH) or a long-lived magnetized neutron star (NS), is, however, still uncertain. General relativistic magnetohydrodynamic (GRMHD) simulations of the merger process represent a powerful tool to unravel the jet launching mechanism, but so far most simulations focused the attention on a BH as the central engine, while the long-lived NS scenario remains poorly investigated. Here, we explore the latter by performing a GRMHD BNS merger simulation extending up to ∼100  ms after merger, much longer than any previous simulation of this kind. This allows us to (i) study the emerging structure and amplification of the magnetic field and observe a clear saturation at magnetic energy Emag∼1051  erg, (ii) follow the magnetically supported expansion of the outer layers of the remnant NS and its evolution into an ellipsoidal shape without any surrounding torus, and (iii) monitor density, magnetization, and velocity along the axis, observing no signs of jet formation. We also argue that the conditions at the end of the simulation disfavor later jet formation on subsecond timescales if no BH is formed. Furthermore, we examine the rotation profile of the remnant, the conversion of rotational energy associated with differential rotation, the overall energy budget of the system, and the evolution of the GW frequency spectrum. Finally, we perform an additional simulation where we induce the collapse to a BH∼70  ms after merger, in order to gain insights on the prospects for massive accretion tori in case of a late collapse. We find that a mass around ∼0.1  M⊙ remains outside the horizon, which has the potential to power a SGRB via the Blandford-Znajek mechanism when accreted.