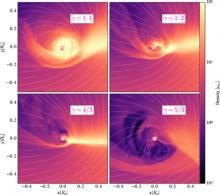 During a common envelope (CE) episode in a binary system, the engulfed companion spirals to tighter orbital separations under the influence of drag from the surrounding envelope material. As this object sweeps through material with a steep radial gradient of density, net angular momentum is introduced into the flow, potentially leading to the formation of an accretion disk. The presence of a disk would have dramatic consequences for the outcome of the interaction because accretion might be accompanied by strong, polar outflows with enough energy to unbind the entire envelope. Without a detailed understanding of the necessary conditions for disk formation during CE, therefore, it is difficult to accurately predict the population of merging compact binaries. This paper examines the conditions for disk formation around objects embedded within CEs using the "wind tunnel" formalism developed by MacLeod et al. We find that the formation of disks is highly dependent on the compressibility of the envelope material. Disks form only in the most compressible of stellar envelope gas, found in envelopes' outer layers in zones of partial ionization. These zones are largest in low-mass stellar envelopes, but comprise small portions of the envelope mass and radius in all cases. We conclude that disk formation and associated accretion feedback in CE is rare, and if it occurs, transitory. The implication for LIGO black hole binary assembly is that by avoiding strong accretion feedback, CE interactions should still result in the substantial orbital tightening needed to produce merging binaries.