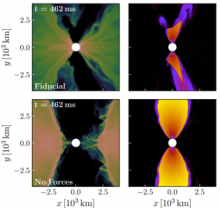 The multimessenger event GW170817/GRB 170817A confirmed that binary neutron star (BNS) mergers can produce short gamma-ray burst (SGRB) jets. This evidence promoted new investigations on the mechanisms through which a BNS merger remnant can launch such a powerful relativistic outflow and on the propagation of the latter across the surrounding post-merger environment. In particular, great strides have been made in jet propagation models, establishing connections between the initial jet launching conditions, including the incipient jet launching time (with respect to merger) and the injection parameters, and the observable SGRB prompt and afterglow emission. However, present semi-analytical models and numerical simulations (with one notable exception) adopt simple hand-made prescriptions to account for the post-merger environment, lacking a direct association with any specific merging BNS system. Here, we present the first three-dimensional relativistic hydrodynamics simulations of incipient SGRB jets propagating through a post-merger environment that is directly imported from the outcome of a previous general relativistic BNS merger simulation. Our results show that the evolution and final properties of the jet can be largely affected by the anisotropies and the deviations from axisymmetry and homologous expansion characterizing more realistic BNS merger environments. In addition, we find that the inclusion of the gravitational pull from the central compact object, often overlooked, can have a major impact. Finally, we consider different jet launching times referred to the same BNS merger model and discuss the consequences for the ultimate jet properties.