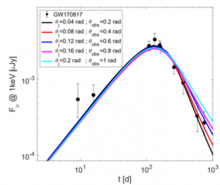 One of the key properties of any binary is its viewing angle (i.e., inclination), θobs. In binary neutron star (BNS) mergers it is of special importance due to the role that it plays in the measurement of the Hubble constant, H0. The opening angle of the jet that these mergers launch, θj, is also of special interest. Following the detection of the first BNS merger, GW170817, there were numerous attempts to estimate these angles using the afterglow light curve, finding a wide range of values. Here we provide a simple formula for the ratio θobs/θj based on the afterglow light curve and show that this is the only quantity that can be determined from the light curve alone. Namely, it is impossible to determine each of the angles separately without additional information. Our result explains the inconsistency of the values found by the various studies of GW170817 that were largely driven by the different priors taken in each study. Among the additional information that can be used to estimate θobs and θj, the most useful is a VLBI measurement of the afterglow image superluminal motion. An alternative is an identification of the afterglow transition to the sub-relativistic phase. These observations are possible only for mergers observed at small viewing angles, whose afterglow is significantly brighter than the detector's threshold. We discuss the implications of these results to measurements of H0 using GW observations. We show that while the viewing angle will be measured only in a small fraction of future BNS mergers, it can significantly reduce the uncertainty in H0 in each one of these events, possibly to a level of 4-5\%. A minority of the mergers with high precision measurements of this kind may dominate in the future the precision in which H0 will be measured using this method.