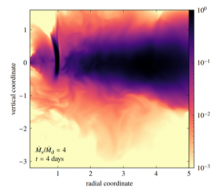 The black hole of an active galactic nucleus is encircled by an accretion disk. The surface density of the disk is always too low to affect the tidal disruption of a star, but it can be high enough that a vigorous interaction results when the debris stream returns to pericenter and punches through the disk. Shocks excited in the disk dissipate the kinetic energy of the disk interior to the impact point and expedite inflow toward the black hole. Radiatively efficient disks with luminosity ≳10−3 Eddington have high enough surface density that the initial stream-disk interaction leads to energy dissipation at a super-Eddington rate. Because of the rapid inflow, only part of this dissipated energy emerges as radiation, while the rest is advected into the black hole. Dissipation, inflow, and cooling balance to keep the bolometric luminosity at an Eddington-level plateau that lasts tens of days. After the plateau, the luminosity decreases in proportion to the disk surface density, with a power-law index between −3 and −2 at earlier times, and possibly a steeper index at later times.