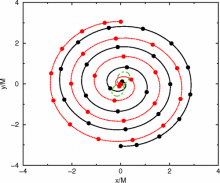 We present the first fully-nonlinear numerical study of the dynamics of highly-spinning-black-hole binaries. We evolve binaries from quasicircular orbits (as inferred from post-Newtonian theory), and find that the last stages of the orbital motion of black-hole binaries are profoundly affected by their individual spins. In order to cleanly display its effects, we consider two equal-mass holes with individual spin parameters S/m2=0.757, both aligned and antialigned with the orbital angular momentum (and compare with the spinless case), and with an initial orbital period of 125M. We find that the aligned case completes three orbits and merges significantly after the antialigned case, which completes less than one orbit. The total energy radiated for the former case is ≈7% while for the latter it is only ≈2%. The final Kerr hole remnants have rotation parameters a/M=0.89 and a/M=0.44 respectively, showing the unlikeliness of creating a maximally rotating black hole out of the merger two highly spinning holes.