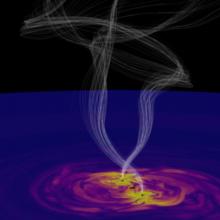 It is estimated that somewhere in the universe a few pairs of supermassive black holes merge every single year, leaving behind a still more massive single black hole at the centers of the galaxies where this occurs. The energy released is enormous, and the effect on galactic evolution profound, but no such event has ever been identified because the overwhelming majority of the energy is released in gravitational waves, which are as yet undetectable. This project will characterize the visible light signals that should be given off by nearby gas under the influence of the event, using complex numerical simulations. Training in these techniques will be of great value for the future activities of the junior researchers on the team.

Although there should be sufficient gas close enough to the merger events to give off visible radiation, the character of any emitted signals is unknown. Particular questions include in which band most of the light will emerge, what is its spectrum, and how does the radiated power vary in time? This work will start to answer these questions. The extremely complex interaction between the surrounding gas and a pair of black holes bound to one another involves strongly nonlinear physics, including magnetohydrodynamic (MHD) turbulence, shocks, and dynamical spacetimes, which can only be tackled numerically. This requires carefully structured simulations using radiation transfer post-processing to predict key observable features, using the team's new infrastructure that supports consistent MHD calculations on separate grids and across qualitatively different spacetimes. Calculations with astrophysically plausible parameters should identify unique photon signals for observers to locate black holes on their way to merger.

This computational system should also be useful to many other astrophysical simulations. The work will train a number of graduate students and post-doctoral fellows in the techniques of large-scale numerical simulation, skills that are valuable far beyond the confines of astrophysical research. The team is active in outreach both to non-science students and to the general public, including work to engage deaf and hard-of-hearing students in the sciences.